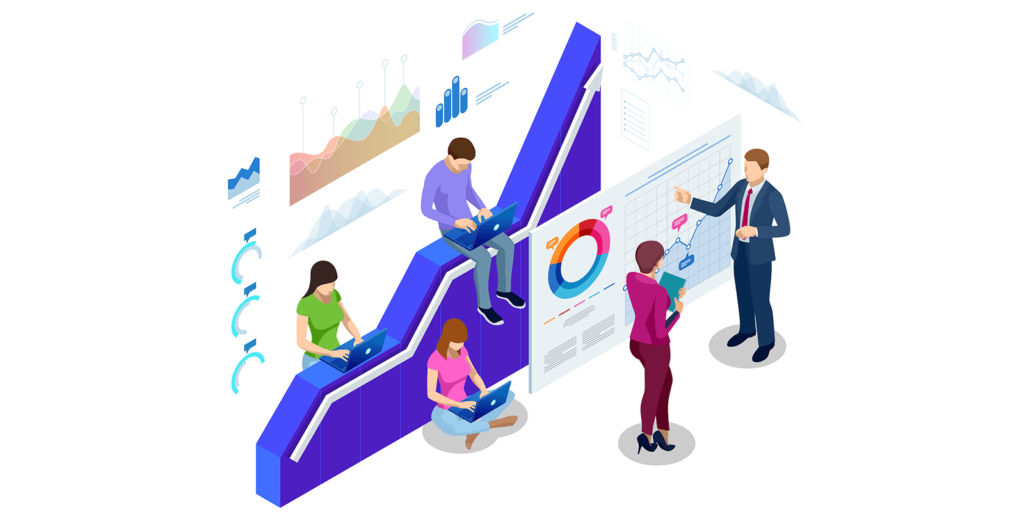 How much has remote work impacted business? Here are some intriguing remote work statistics that offer a by-the-numbers look at where things stand in 2020.
Save

If you still consider remote work simply a desirable perk, you’re definitely in the minority. A whopping 74% of respondents in an annual survey believe that flexible working has become the “new normal.”

Working outside of their company’s main location and having a choice of work environment is now a key factor for many job seekers when evaluating new career opportunities.

Just how much has remote work impacted the notion of business as usual? Here are some intriguing remote work statistics that offer a by-the-numbers look at where things stand.

A special analysis done by FlexJobs and Global Workplace Analytics found that there has been a major upward trend in the amount of people working remotely in the U.S. In the span of one year, from 2016 to 2017, remote work grew 7.9%. Over the last five years it grew 44% and over the previous 10 years it grew 91%. 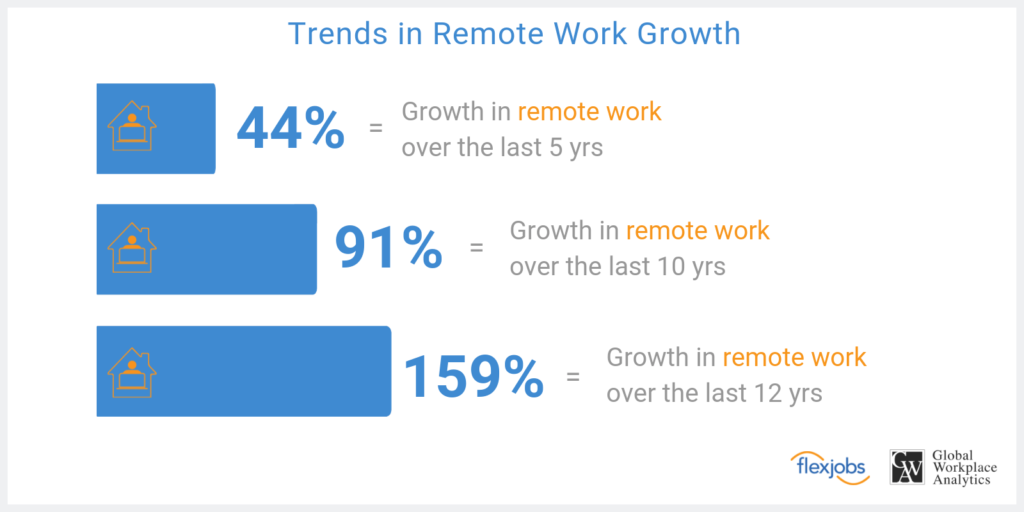 In an article by Pragli, a virtual office product for remote teams, remote work was found to be more common in cities with high income levels. Why? “Remote work positions tend to be knowledge work that pays higher salaries, such as software engineering and accounting.”

Pragli also found that locations with small remote populations generally have industries “with physical work constraints, such as agriculture and manufacturing.” Many blue-collar jobs like this simply cannot be done from a home office.

Eighty percent of U.S. workers say they would turn down a job that didn’t offer flexible working, and it’s so important to them that more than a third say they would prioritize such arrangements over having a more prestigious role. In another survey, more than three-fourths of respondents cited flexible schedules and remote work as the most effective nonmonetary ways to retain employees.

Remote Work Is Good for Business

Among performance-based remote work statistics, 85% of businesses confirm that productivity has increased in their company because of greater flexibility. Additionally, 90% of employees say allowing for more flexible work arrangements and schedules would increase employee morale, while 77% say allowing employees to work remotely may lead to lower operating costs.

Amerisleep’s study of 1,001 remote workers found that they are 57% more likely than the average American to be satisfied with their job. Plus, nearly 80% of respondents described their typical stress level during the workweek as either “not stressed” or only “moderately stressed.” 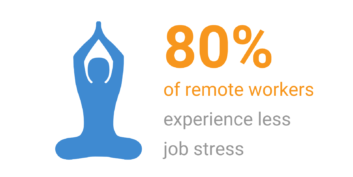 FlexJobs’ annual survey found that 65% of respondents are more productive in their home office than at a traditional workplace. Fewer distractions and interruptions, less stress from no commute, minimal office politics, and a personalized, quiet environment are all contributors to a more productive remote worker.

In another survey, 47% said they strongly agree that flexible work arrangements “would or do allow me to be more productive” and 31% said they somewhat agree.

Remote Workers Can Be Healthier

Remote workers tend to take less sick days, likely due to less exposure to germs in a typical office. According to Indeed’s Remote Work Survey, 50% of remote employees said working from reduced their sick days and 56% said it reduced their absences.

In FlexJobs’ Work-Life-Relationship survey, 86% of respondents think a flexible job would reduce their stress, and 89% said they think they would be able to take better care of themselves.

According to a report done collaboratively with FlexJobs and Global Workplace Analytics, the average annual income for most telecommuters is $4,000 higher than that of nontelecommuters. Add to that the ability to save more money—FlexJobs estimates $4,000 a year—and remote workers come out on top.

Flexible work, especially working from home, reduces traffic congestion, air pollution, and road wear and tear with either a reduced or eliminated commute into an office.

According to the “2017 State of Telecommuting in the U.S. Employee Workforce” report: “Existing telecommuters reduce greenhouse gas emissions by the equivalent of taking over 600,000 cars off the road for a year. If the work-at-home workforce expanded to include those who could and wanted to telecommute half of the time, the GHG savings would equate to taking 10 million cars off the road.”

Remote Workers Stick with It

In recent report from Zillow, more than half of home buyers who work remotely say remote work influenced a major home change, whether that’s moving to a different house (28%) or to a different location (24%).

Additionally, 30% of home buyers indicated that a commute between 15 and 29 minutes was their max. And only 12% of home buyers said they were willing to commute an hour or more.

Furthermore, 62% of Gen Z and millennial home buyers work remotely at least one day per week. Remote work gives the workforce’s two youngest generations, who are often burdened with student debt, more options with where they live, reducing the necessity to live near large metropolitan city centers in order to maximize career potential.

Remote Work Is Here to Stay

Finally, in a study conducted by Condeco Software, 41% of global businesses surveyed say they already offer some degree of remote working, while 60% provide flextime opportunities that allow employees to choose when to start and end their workday. Upwork’s “Future Workforce Report” predicts that 73% of all teams will have remote workers by 2028.

And it’s a good thing, too, since 75% of current teleworkers say they plan to work remotely for the rest of their career!

Remote works statistics indicate benefits across the board, ranging from environmental to performance-oriented benchmarks. If you’re interested in learning more about remote work, we’ve got you covered! Check out our blog to read about the latest in remote work, career development, and so much more.

A version of this article was originally published on July 27, 2019.

Beth Braccio Hering has been a freelance writer for 20 years. In addition to extensive contributions to various Encyclopaedia Britannica products, her work has been published by outlets such as CareerBuilder, Johnson & Johnson’s BabyCenter, Walt Disney Internet Group, and…Read More >