Breaking Barriers: Communication Between Generations in the Workplace

by Rachel Pelta  | December 14, 2019
With so many generations working together at the same time, communication problems are bound to happen. Here’s how to understand the gap, and bridge it.
Save 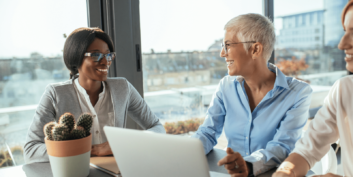 More and more people are working long past the “traditional” retirement age.

At the same time, the youngest generations are entering the workforce for the first time.

And, let’s not forget everyone in between. For possibly the first time in history, as many as five different generations are working side by side.

There’s no denying that each generation has its quirks. Whether that be a different outlook on social norms or what a career path should look like, every generation has their values and beliefs, often influenced by their experiences.

You may think it’s not a big deal. The act of communicating is people sharing ideas, opinions, or information. How hard is it?

Communication Through the Ages

Communication has been around since the stone age. The first cave drawings were possibly a way for early humans to share information. And as humans evolved, so did our communication styles.

While some people may argue that current forms of communication have come full circle from cave drawings to emojis, there’s no denying that there is a multitude of communication options today. Text, email, tweets, videos, pictures. You name it, you can use it to communicate.

Even though written communication has been around since the stone age, language is always evolving. Whether that’s the spoken word or written works, meanings and interpretation will change as humans change. Even the meaning behind punctuation can change.

Communicating in the Digital Age

In the digital age, communication tends to be written more than spoken, especially in the workplace. However, different generations tend to interpret written communications differently, and this can lead to intergenerational conflict.

For example, older generations see the ellipsis, the “…” at the end of a sentence, as a way to create mystery or indicate a loss of thought. However, younger generations tend to view the ellipsis as a passive-aggressive power play.

These differences can lead to tension between generations. If this tension is not addressed, over time, coworkers may choose not to communicate with each other unless absolutely necessary.

Communication in the Workplace by Generation

Before we talk about how language changes have impacted communication, let’s first talk about the different generations and their preferred workplace communication method.

Baby boomers grew up with face-to-face communications as the dominant method of workplace communication. That said, during a majority of the boomers’ work years, the telephone became an important tool in their offices.

But the phone was as far as it went. Email wasn’t invented until the late 60s (or early 70s depending on who you ask). And, it wasn’t widely adopted by companies until the late 1980s. Even when there was access to email at work, you generally had to connect over a slow dial-up connection, and sending and receiving email messages was, well, inefficient.

Generation X was the first generation to truly embrace digital communications in the workplace (and their life). The earliest adopters of email, they became comfortable with the written word as their primary method of communication at work.

Even though Gen Xers complain about the barrage of email messages they receive, they haven’t embraced other forms of digital communication. They generally aren’t fans of using social media and will, more often than not, choose email when they can.

Whether you call them Gen Y or millennials, this generation is considered the first “digitally native” generation. Growing up with cell phones (and even smartphones) means texting and other messaging apps are just a part of who they are and how they communicate.

Gen Z is only just now entering the workforce, so not much is known about how they prefer to communicate at work. Like millennials, Gen Z has grown up with access to screens and the internet from a young age. However, unlike millennials, Gen Z grew up with lightning-fast internet connections. So, while they too may prefer written communications over in-person ones, they also expect a fast response to their messages.

Whether or not you prefer the written word or a pleasant chat, the fact is every business still uses written communications. Interoffice memos aren’t going anywhere, even in a paperless office.

However, even though most generations prefer written communications for work and personal communications, that doesn’t make them perfect.

One of the biggest problems with written communication is that it’s hard to interpret tone. When you can’t see who you’re talking too, you have no idea if your jokes are on target or falling flat. When you read something, it’s easy to misinterpret what the writer means. Is that sarcasm or something else? It’s hard to say.

And, while you can help with tone through the use of emojis (the eye-rolling emoji can help indicate sarcasm or irony), not everyone interprets the same emoji the same way. The eye roll emoji can also indicate boredom, annoyance, or impatience, among others.

Even punctuation can be subject to interpretation. Let’s go back to the ellipsis example.

Older generations—boomers and yes, Gen Xers—learned that the ellipsis was a way to be playful or even coy. It’s also used to indicate that there’s more to the sentence, but it doesn’t need to be said. It’s implied that the reader knows what’s being expressed without the writer having to write it all out.

And, as stated earlier, an ellipsis can indicate an incomplete or trailed off thought.

This is where written communication can get difficult. It’s not just the difference in communication styles (that’s part of it, though). It’s that different generations have different interpretations of the same thing.

Of course, multiple meanings and “reading between the lines” is a hazard of daily life. However, in the work world, this can lead to generational communication problems that can impact the entire company.

For example, a young person on the receiving end of a written communication with an ellipsis may worry that they’ve done something wrong when no follow-up communication arrives.

Likewise, an older worker may be annoyed by a colleague who “never” uses a period while exchanging messages through a chat platform (which is considered rude or curt by some generations).

So, if written communication presents challenges, but everyone still uses it at work, how can people bridge the generational communication gap in the workplace?

Yes, that is ironic. But, communicating is the best way to start bridging the generational communication gap in the workplace.

Explain to older generations that younger generations interpret things differently. While you may get a few in-person eye rolls, help them understand the how and the why behind this. They may not give up using their ellipsis, but they may start using more emojis or exclamation points.

And, for the younger generations, explain that ellipsis and periods are OK and don’t mean the same thing to older generations. An ellipsis isn’t a passive-aggressive move. It’s a way to show that the writer knows you get it. And a period isn’t a command or anger. It’s just how they end sentences.

Interestingly, a recent study found that part of the cause of generational communication gaps has nothing to do with emojis or periods. It’s caused, in part, by each generation having negative perceptions about the others.

The study examined the communication gap between millennials and boomers and found that they have more communication methods in common than they realize. However, each generation feels the other has a negative impression about them (lazy and entitled versus conservative and tech ignorant), which may cause each generation not to bother communicating with the other.

Face-to-face communications can help eliminate a lot of problems with the written word. People can see body language, hear sarcasm (instead of guessing), and can see if jokes land as they should. And, when something isn’t working, there’s a visual cue so both parties can quickly change course.

Try encouraging face-to-face communications over written ones when there seems to be a problem. If face-to-face isn’t possible, thanks to a distributed workforce, there’s always video. And, when all else fails, someone may have to pick up the phone.

Looking for other tips and tricks to successfully maneuver the workplace? Subscribe to our newsletter today, and we’ll deliver them straight to your inbox!

We’d love to hear your thoughts and questions. Please leave a comment below!

All fields are required.